Take your PIC: What it takes to reduce Pre-Install Cancellations

Take your PIC: What it takes to reduce Pre-Install Cancellations
by Hargo Kalra

After much marketing and sales effort, a customer has trusted in you enough to place an order.  From this point on, as idealistic as this may sound, to do everything in one’s power to repay that trust and ensure a seamless experience from order to execution is near sacred.

Consider two scenarios in the example of eating at a restaurant. You’ve walked in, perused the menu, selected a dish and placed an order. For any number of reasons, the order is taking longer than expected.

I’d venture to say the large majority of us would prefer scenario 2.  Expand the delay metaphor to other phases of life over a larger timeline, with wait times reaching into days or weeks, and you’ve successfully managed to reduce your customer lifetime value from thousands to zero.

This phenomenon of pre-install cancellation (cleverly termed PIC rate) is a prickly thorn for the telco industry, but one that can be mitigated to a large part by simply engaging with customers – in a simple, intuitive way.

The PIC rate above refers to the roughly 10-20% of US and UK telco customers who typically cancel their install appointment between the time of order and the install date.  This could be for a slew of reasons from a change of mind on the part of the customer or a scheduling error on the part of the provider.  Most, if not all, of these individuals will go elsewhere to satisfy their telecommunications needs or be persuaded to stay with their existing provider (typically using a discount). It doesn’t take a mathematician to run the numbers.  Consider this example for a telco provider that we work with: 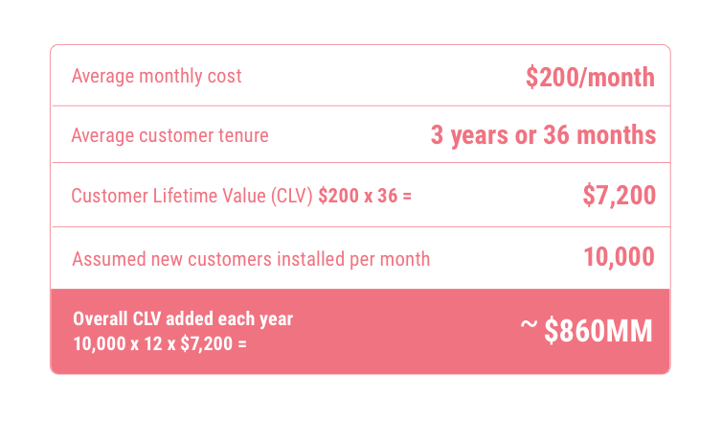 That’s the size of the overall pie for new installs.  If we then account for PIC and the potential for lost revenue, we arrive at a minimum of $86MM CLV lost per year (10% of the above).

That is real currency walking out your door.  Additionally, at least 50% of these customers, once bitten twice shy, would never return to a provider with whom they’ve had an unwelcome experience.  And it doesn’t stop at unrealized revenue.  In fact, the sales and marketing effort that has gone into acquiring these customers (successfully at that) is now putting you further in the red.  If even part of this number can be recouped by opening a dialogue with the customer, for example keeping them apprised of timelines, offering to reschedule etc., then the provider should be duty-bound to do so.

The naysayers would refer to the inordinate amount of time and money it would take to communicate with these customers; costs that may defray the value being brought in. However, this argument is easily rebuffed by the hidden cost involved with the above PIC rate, i.e. the fact that at least part of these customers would have called in (perhaps multiple times) to figure out the status of their order, expected timelines for completion, to cancel or to reschedule. These inbound calls are not insignificant in terms of the time call center agents spend in attempting to placate at best annoyed, and at worst, irate customers.

Given that we’re not still in the dark ages of faxes and dial-up, what seems like a conundrum can actually be solved to a large extent by Artificial Intelligence (AI).

Here’s what that would look like (in a simplified process): 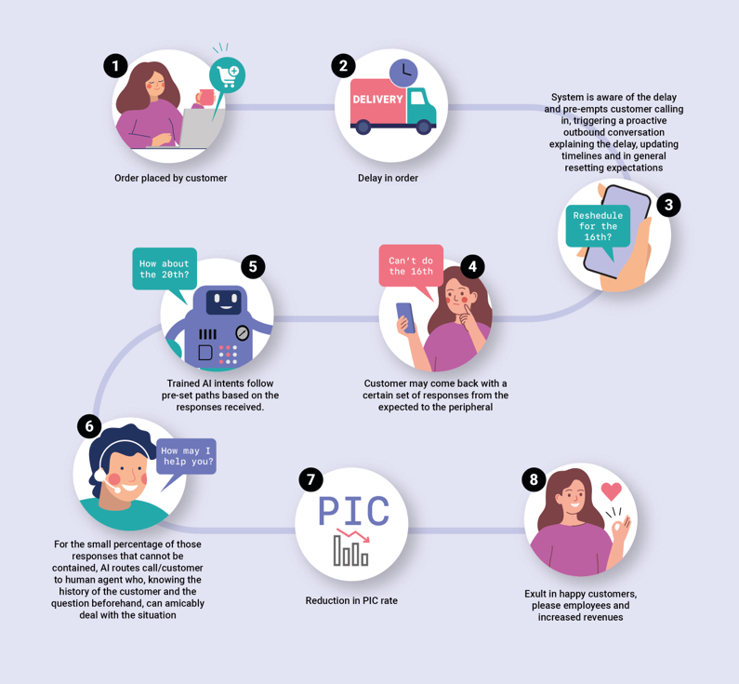 The bottom line is simply to say that while the problems of old systems continue to exist, the tools to solve them are now at our fingertips. To not avail ourselves of these tools to better help our customers is either ignorance or apathy. Either way, it represents a significant opportunity lost – in increased revenues, lower costs, happier customers and increased market share.